In this article, we’ll take a look at the Euro 2020 outright odds and see… 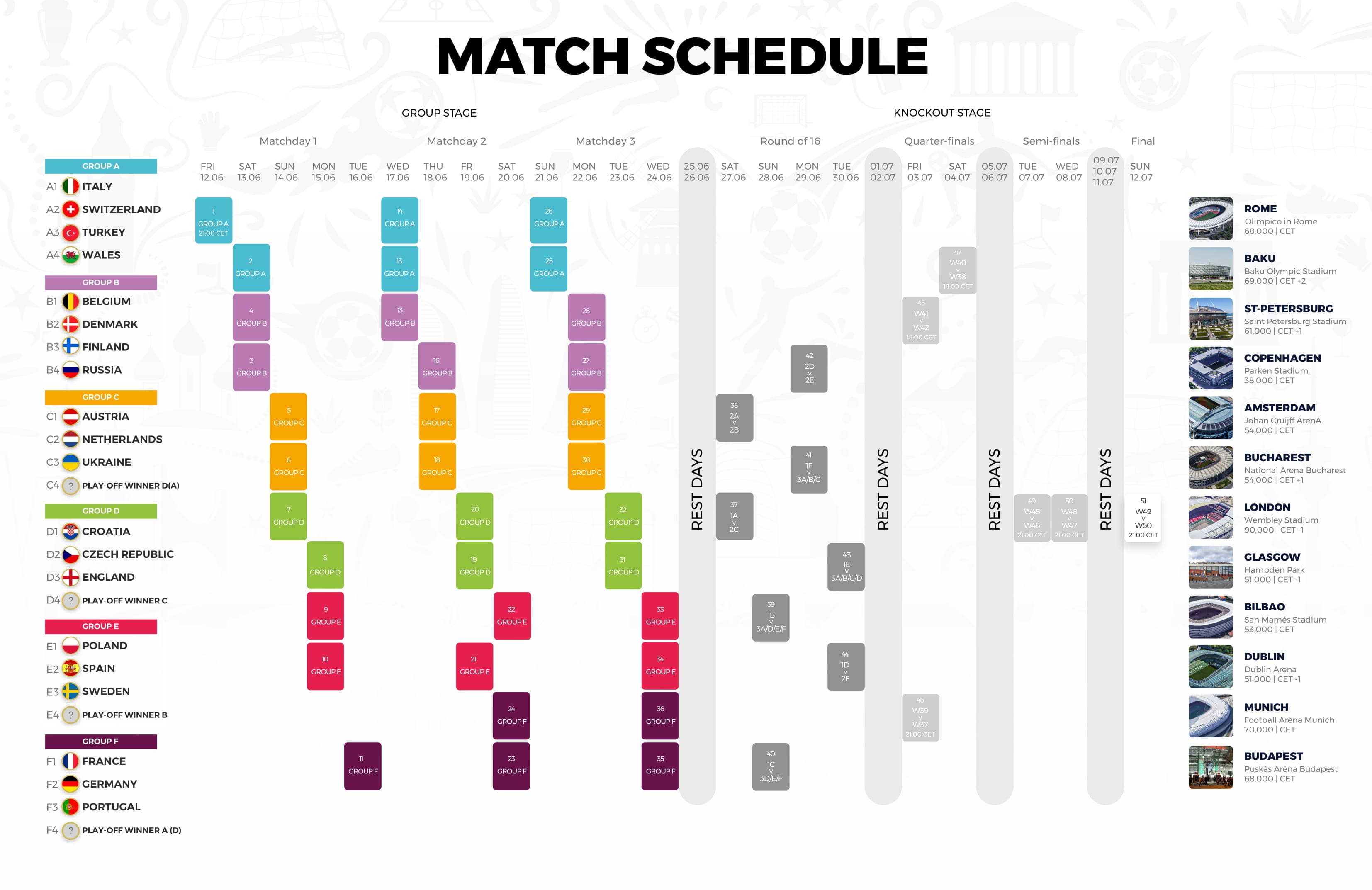 Welcome to our detailed Euro 2020 betting guide. Here you can find all the relevant information about this event. Take a closer look and learn more about this competition.

What You Need to Know About Euro 2020

Euro 2021 will be the 16th edition of the quadrennial men’s international football competition the European Championship, started in France back in 1960. The summer’s showpiece sporting event will run between 12 June and 12 July with a number of major European cities playing host.

Both semi-finals and the final will be played at Wembley Stadium in London. Other venues including Munich, Rome, Baku, St Petersburg, Bucharest, Dublin and Glasgow. 24 teams will be divided into six groups of four teams following the Euro 2021 qualifiers. With each team playing the other three participants once, the nations finishing first and second at the end of the group phase will then progress to the knockout stages of the competition.

Portugal rate as the current champions, having beaten France 1-0 after extra-time at the Stade de France thanks to a winning goal from Eder with 109 minutes on the clock. That was The Navigators first European winners medal. The history books show Germany rate as the competition’s most successful team to date with three titles and three runners-up finishes.

An interesting fact about Euro Cup 2021 is it will be the first time the tournament has used the Video Assistant Referee (VAR) technology and after dividing opinion in the Premier League and Champions League in recent seasons it will be interesting to see just how big an impact the system has on results. Will we see the Euro 2021 final decided by VAR?

European Championship Host Cities: Where Will Be Held? Key Dates

To celebrate the 60th birthday of the European Championship in what has been described by organisers as a strict one-off event, Euro Cup 2021 will be held across 12 host cities during the month of play. The first match will take place on 12 June at the Stadio Olimpico in Rome with the final played and a champion crowned on 12 July at Wembley Stadium. Complete list of host venues:

As the stadium with the largest capacity on that list, Wembley Stadium in London, England was chosen to host both semi-finals and the final. Each of the other venues mentioned above will host three group Euro 2021 fixtures and one knockout game from the round of 16 or quarter-finals.

For example, Hampden Park in Glasgow will provide the backdrop for three group games and a round of 16 tie. Below is a list of important dates to add to your 2021 diary:

How to Get Your Ticket

Euro 2020 is all about bringing major international football to the people, hence the tour of major European cities. There are two ways to attend a Euro Cup 2020 match. Firstly, you can join a supporters club of an international team and apply for Euro 2020 tickets.

The first batch of Euro 2020 tickets have already been awarded but there will be another sales phase before the end of 2019. If your team has qualified you are able to buy Euro 2020 tickets through the official UEFA site. The second method involves applying for a ticket to the match taking place in your region.

For example, you could apply for one of the group games yet to be announced bet scheduled to be played at the Aviva Stadium in Dublin. Euro 2020 tickets are awarded in a ballot so you must enter to be in with a chance of purchasing a ticket. This is due to the increased demand for Euro 2020 tickets at this stage.

Until the group matches and then knockout Euro 2020 fixtures are announced it will not be known which fixture you are applying for. This will become clearer following the draw for the group stages. Euro 2020 ticket timeline:

UEFA informed members of the worldwide sporting press that one million Euro 2020 tickets across the 44 matches will cost no more than £43. Prices are expected to rise into the high hundreds for Category A tickets for the semi-finals and final at Hampden.

Where I Can Watch the European Championship?

Euro 2020 will be the most widely broadcast and most watched European Championship competition ever. Advancements in technology since 2016 means as well as on a number of major television channels across the world, including BBC and ITV.

Moving onto the subject of betting on the Euro Cup 2020 championships and we provide our Euro 2020 betting guide. Sports bettors really will be spoiled for choice with more ways to gamble on the tournament and each game than ever before. You will be able to wager on the outright winner or a number of specials markets, including top goal scorer, stage of elimination, name the finalists and player of the tournament.

In each and every fixture, from the opening group match through to the betting on final, punters can predict 90 minutes winner, both teams to score, total goals, first goal scorer, half time/full time, handicap and over 100 others, both pre-match and in-play.

There will also be numerous promotions designed to enhance your enjoyment of the play and make it even more difficult to lose your stake. New customers will be given a unique Euro 2020 sign up bonus while existing customers will enjoy offers and deals such as cash back on losing bets, enhanced odds and extra places each-way. C

heck the promotions tab of your favourite bookmaker in the build up to the big kick-off. You should wait until the final Euro 2020 line up has been decided following the Euro 2020 qualifiers and the group stages draw made. From there you will have a better picture of each team’s route and chances of reaching the latter stages.

You can also then check any respected price comparison website to see which bookies are offering the most generous odds on your picks. The Euro 2020 winner odds has France, England and Belgium as Euro 2020 favourites with the likes of Portugal, Italy and Holland rating as underdogs. Keep our Euro 2020 betting guide close when placing your tournament bets and Euro 2020 predictions.