The Euro 2020 dates and teams have now been confirmed, with the championship taking place from 11th June to 11th July in 11 host cities across Europe.

Make sure you check back every day for up to date betting tips as we’ll be posting our tips for every Euro 2020 matchday.

With the end of the Nations League, the 6 seeding pots were announced. The number of teams which will participate in the finals next year is 24.

How were the teams chosen? Simple. It was pre-determined that the two top-ranking teams from each group will take part in the finals. The four remaining places were then filled out by winners from playoffs in October and November 2020.

How were the groups formed?

The decision regarding which teams were involved in the draw was based on the Nations League Rankings. Those 55 teams were then divided into 7 pots. Of 7 pots, the first one was made up of Nations League finalists. The rest of the pots were filled out according to the teams’ overall ranking.

This paragraph will focus on the Euro 2020 calendar. We’ll mention when the matches are being played. As stated in the Euro 2020 schedule, there were 10 matchdays which were held from the 21st of March to the 19th of November 2019 to decide the majority of the groups.

In the list below you can see the rest of the Euro 2020 fixtures timeline: 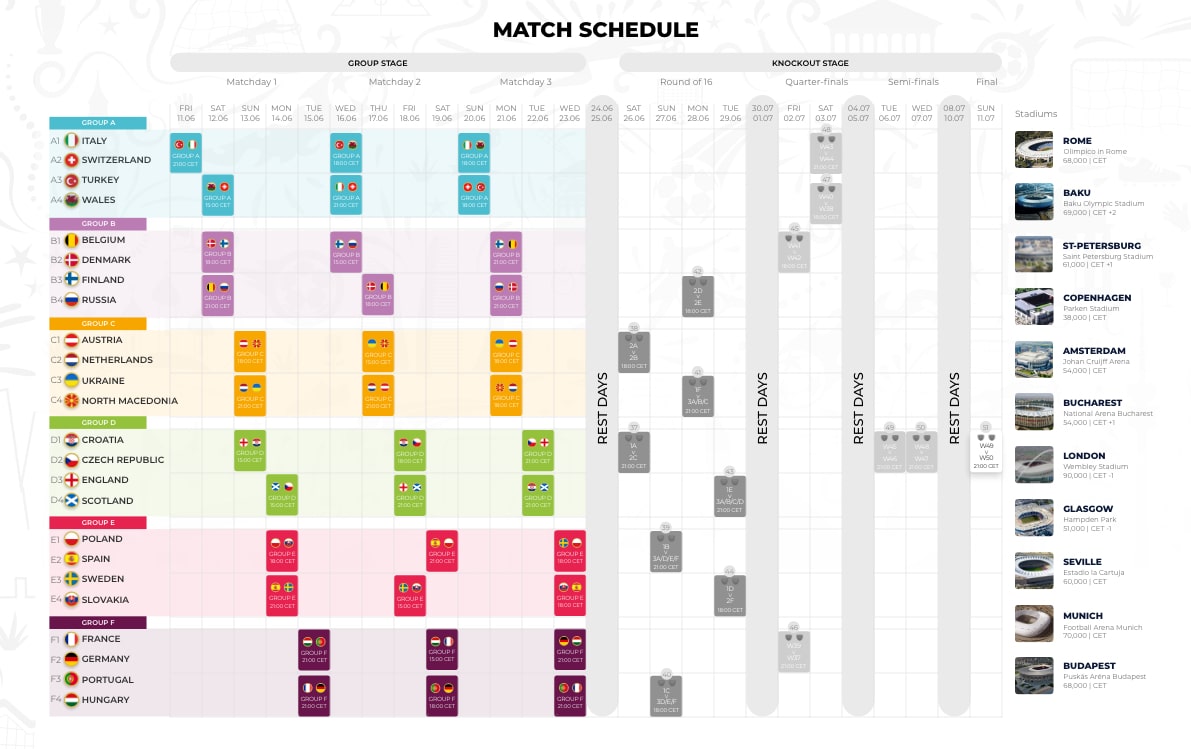 According to the Euro 2020 calendar, the play-off draw took place on 22 November 2019 once the qualifiers were finished. The playoff draw consisted of single-leg semi-finals which were held in October and November 2020.

The 24 teams that qualified for the Finals have been divided into six groups of four. Their European Qualifiers ranking determined the teams’ seedings. There are 11 host nations that have been pre-elected and paired in the same groups.

When creating the seedings, numerous criteria were taken into account (points, number of scored goals, number of wins, final position in the group, etc). In line with the Euro 2020 schedule, the Euro 2020 Final Tournament will begin on 11 June and end on 11 July 2021 at Wembley Stadium, in London.

Unlike the previous Euro 2016, the Euro 2020 fixtures are being played in 11 different countries. Below, you can see the list of the countries, cities and stadiums where the matches will take place.

The Euro 2020 group stage is made up of five groups, going from A to F, with four teams in each group. In each group, three teams qualified during the main qualifiers, while the last team qualified from the play-offs. Group F has been nicknamed the “Group of Death” due to the high calibre of its teams.

Visit Unibet
Up to £40 Money Back + £10 Casino Bonus
18+ begambleaware.org. New customer only. Min deposit £10. Money back as bonus if first bet loses. Wagering requirements: sportsbook 3x at min. odds of 1.40 (2/5), casino 35x. Unless forfeited the sportsbook bonus must be wagered before using the casino bonus. Bonus expires 7 days after opt-in. No deposit required for NI customers. Call 08081699314 to claim. Full T&Cs apply.

Visit Paddy Power
£20 RISK FREE BET
New customers only. Place your FIRST bet on any sportsbook market and if it loses we will refund your stake in CASH. Max refund for this offer is £20. Only deposits made using Cards or Apple Pay will qualify for this promotion. T&Cs apply. Paddy's Rewards Club: Get a £10 free bet when you place 5x bets of £10+. T&Cs apply.

If you're looking for Euro 2020 betting offers, including free bets, then look no further!…

If you already have your favourites and want to bet on Euro 2021 winner, you…