Once again, after qualifying among other teams for the European Championship, Ukraine will want to erase its poor performance of 2016. With 3 defeats in 3 matches, the “blue and yellow” only made it to the group stage. Finishing first in its group during Euro qualifications (in front of Portugal), could Ukraine aspire to a great performance in June-July 2021?

Born after the USSR dissolution in 1991, the Ukrainian football team played its first official match on 22nd April 1992 against Hungary (1-3 defeat). After a slow start, the team didn’t experience the joys of playing in a final phase of an international competition until the 2006 World Cup.

It was in 2006 that the team reached its apotheosis with a qualification (its only one) for the World Cup in Germany and a run that ended in the quarter-finals against Italy (3-0 defeat).

As for the Euro, Ukraine organised and played in the 2012 edition for the first time in the team’s history. Unfortunately for them, after finishing third in their group, Ukraine exited at the group stage. 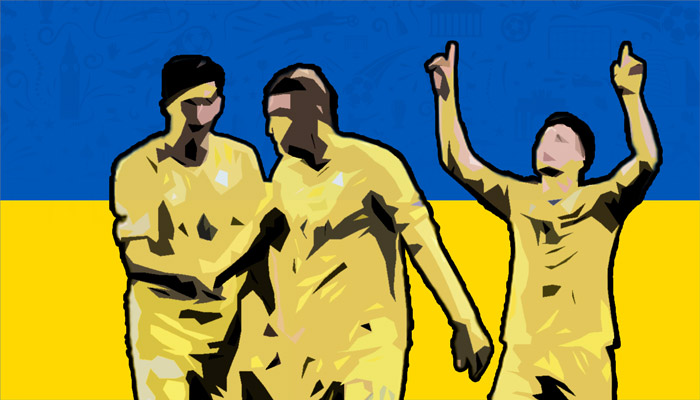 Ranked 24th in the latest rankings, Ukraine qualified for Euro 2020 by finishing first in their group with their generation of promising players who have gained experience.

With 44 days to go until Euro 2020, coach and 2004 “Ballon d’Or” winner Andrei Shevchenko is expected to announce his squad for the tournament soon.

Andriy Shevchenko: The Legend Who Became a Coach

Top scorer in the Ukrainian national team’s history, mythical player of AC Milan, 2004 “Ballon d’Or”, the former striker Andriy Shevchenko needs no introduction. In 2016, he took charge of the national team, which he managed to qualify for Euro 2020. His new challenge? To put Ukraine’s name forward for the next World Cup, in which they have not participated since 2006.

For this, he can count on many talented young players such as Zinchenko (Manchester City), Malinovsky (Atalanta) or Tsygankov (Dynamo Kiev). His ideas for the game enabled him to snatch a draw against the French team last month, and his plan was to close down the French left flank, thus preventing Kylian Mbappé from getting any speed.

The Ukrainian home and away jerseys are in the colours of the country’s flag: one is entirely yellow, the other blue.

Ukraine is in Group C at Euro 2020. They will face Austria, North Macedonia and the Netherlands.

🏃 Ukraine’s Preparation for the Euro

To everyone’s surprise, Ukraine finished in first place in their Euro 2020 qualifying group without losing a single match. They outclassed Portugal and Serbia.

However, the Nations League was more difficult for the Yellow and Blue, who finished in last place in their group A4.

Six Matches Before the Euro

Having already played three matches for the 2022 World Cup qualification (three draws), Ukraine will have three more friendly matches to play to prepare for Euro 2020.

Used to playing left-back with Pep Guardiola, the young Ukrainian is more of a left-sided player for his country. He has performed well in a series of matches, relegating Benjamin Mendy to the bench.

A midfielder by training, Guardiola takes advantage of all his qualities. Despite being a full-back, he moves into the middle of the pack when his team has possession, allowing City to attack with five men. A fan of his coach at club level, his wife even said that the player was constantly taking notes of his speeches and tactics.

He is also a player who does not hide his ambitions. He said he thought it was possible for City to win all the titles this season, as Bayern did last year and Barca has done in the past.

With the national team, he has more than 35 caps and has scored 5 goals.

It is impossible to talk about the Ukrainian national team without mentioning its veteran goalkeeper, Andriy Pyatov. The 36-year-old goalkeeper is still with the national team and has played no less than 96 games for them. As captain, it seems that the Euro will be one of his last chances to lift a trophy with Ukraine.

He has also played over 500 games for his club, the vast majority of which were with Shaktar Donetsk, with whom he won 10 championships, 15 cups and a Europa League in 2009.

His best years are behind him, but he remains an important part of the squad and will certainly pass the torch to his Real Madrid namesake, Andriy Lunin.

Ukraine will participate in the third Euro finals in its history. Take a look at some figures.

Ukraine’s Statistics at the Euro

It is difficult to say where Ukraine will finish in this rather balanced group made up of North Macedonia, Austria and the Netherlands, the latter of which is still the favourite team.

The least experienced team in the competition will be playing in their first international competition. Is this their chance to really play?

This is the nation that seems best equipped to compete with Ukraine for a possible second place. So watch out!

They are the team that seems best equipped to win the group. However, Ukraine has the skill to cause trouble for the Dutch team.