The Stadio Olímpico in Rome is one of the 11 stadiums to host matches at Euro 2020. The Italian stadium is a monument to European football and was logically chosen as the venue for some of the matches.

A city used to events

The Italian city has often hosted important sporting events, be it football or other sports such as athletics or rugby. Four of the tournament’s matches will be played there, including the opening match on 11th June.

The History of Rome’s Stadio Olimpico

All about the Stadium

The stadium is part of the Foro Italico sports complex, which also includes the Stadio dei Marmi, aquatic centres and numerous tennis courts. This space was developed during the 1920s when the Fascist regime requisitioned it for the military to practice shooting. In 1928, the architect Enrico Del Debbio, at the request of the Italian government, began the construction of the ‘big stadium’. 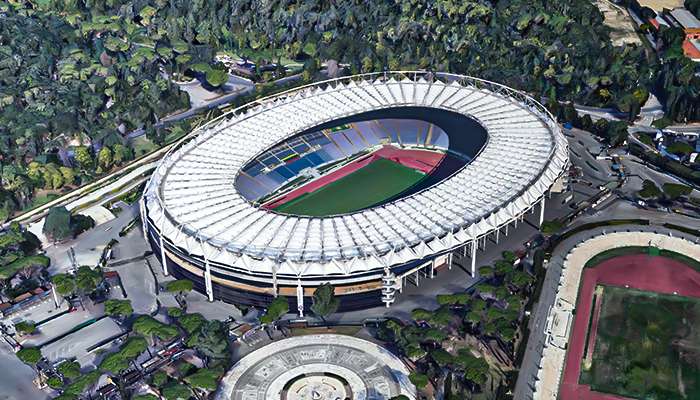 However, it was after the Second World War that the Italian Olympic Committee gave Annibale Vitellozzi the task of building a new stadium. The stadium was originally built to host the 1960 Olympic Games.

Although it was only built in 1957, it has since undergone numerous renovations and modifications. It has a natural lawn and a capacity of 72,698 people. Its record attendance, however, was raised to 73,603 for the 1990 World Cup Final between West Germany and Argentina.

The Stadio Olimpico in Figures

To mark the 60th anniversary of the inaugural European Football Championship, The tournament will be staged in 11 of the most historic stadiums in the world. In Italy, the Stadio Olimpico has been chosen to host four matches: Three from group A and one during the final phase.

As mentioned above, the Olympic Stadium in Rome will host three matches for Group A. This is a definite advantage for the Italian team, which will play all three matches at home. Although the number of spectators allowed will undoubtedly be lowered, the Italians will at least be able to enjoy the popular fervour that the event inevitably brings.

The Roman stadium will also be the venue for one of the quarter-finals of Euro 2020, its only match of the tournament.

Each government will decide on the maximum capacity of each stadium. The Olympic stadium will therefore be defined by the Italian government.