Scotland Euro 2020: Everything you need to know about The Tartan Terriers 🏴󠁧󠁢󠁳󠁣󠁴󠁿

Scotland is one of three UK nations to qualify for the Euro. However, this is only the first time since 1998 that the Scots have participated in an international competition.

It’s been 23 years since Scotland last competed in a world tournament. Indeed, it came as no surprise that the Tartan Terriers finished 3rd in their qualifying group behind Belgium and Russia. However, they secured their ticket to the Euro finals in a tense play-off against Serbia (winning 5-4 via a penalty shootout following a 1-1 draw after extra time).

Andy Robertson’s team will be this competition’s “runt of the litter” and will have to get through a tough group with England, Croatia and the Czech Republic.

On the plus side for the Scots, they will host two games at their Hampden Park home in Glasgow. You certainly won’t be familiar with the entire Scotland squad, so we’ll introduce you to them. However, you will certainly be familiar with some names such as Liverpool left-back Andy Robertson or Red Devils defensive midfielder McTominay. Other names may be added to the list: Kieran Tierney (Arsenal), Ryan Fraser (Newcastle) or Ché Adams (Southampton) also fill out an increasingly competitive squad.

On 16th March, Scotland coach Steve Clark revealed his 26-man squad for the qualifiers against Austria, Israel and the Faroe Islands. These three matches, which are part of the 2022 World Cup qualifiers, will allow him to take stock of the players he has at his disposal with three months to go before a historic Euro for the Scots.

The 26 players picked to represent Scotland at UEFA #EURO2020. pic.twitter.com/uV5epmAEJc

Steve Clarke: The manager who learned from the greats

Former Scottish international defender, Steve Clarke took over as manager in May 2019. He had a very good season during which he was crowned coach of the year with Kilmarnock, finishing 3rd in the Scottish Championship, he had succeeded Alex McLeish.

This position is the culmination of a coaching career spent with the greatest of them all, including José Mourinho, Ruud Gullit and Gianfranco Zola. He also won his first titles whilst he was an assistant coach at Chelsea and has a great track record as a player with the Blues.

The Scottish national team finished third in their Euro 2020 qualifying group, meaning they had to play in two play-offs to qualify.

Finally qualifying from the play-offs, Scotland went on to have a successful Nations League campaign, finishing second in Group B (League 2) behind the Czech Republic.

Three Games for One Qualification

In this break period, Scotland is playing three games as part of the 2022 World Cup qualifiers. In a fairly evenly-matched Group F, the Tartan Terriers will be looking to secure their precious ticket to Qatar by finishing top of their group.

He is certainly the most famous Scottish player. Andrew (or Andy) Robertson, although a defender, will be his country’s star player at the Euro. He is one of the best full-backs in the world with Alexander-Arnold at Liverpool and is captain of his national team. 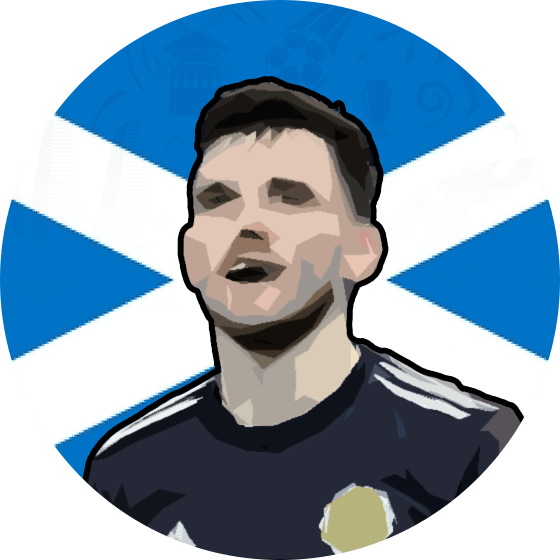 At 27, he has won a Champions League, a Club World Cup, an English Championship and a European Super Cup. A fine record of achievement that has helped to raise his profile and reputation on the international stage.

As good defensively as he is offensively, he will inevitably bring quality to his team at the Euro.

Boys worked hard for the point, great attitude and character coming from behind twice! What a goal super @jmcginn7 🙌🏼 pic.twitter.com/CbGIKMppfv

Manchester United’s defensive midfielder has taken on a new dimension this season. A real leader in the midfield, Scott McTominay is very solid but also decisive.

He has scored 7 goals this season, a very good total for a player playing in his position. He has become a starter under Solskjaer and has obviously contributed to the Red Devils’ great season, currently 2nd in the Premier League.

Scott McTominay took home the Man of the Match award for Scotland against Austria 🏴󠁧󠁢󠁳󠁣󠁴󠁿 pic.twitter.com/YB36FOfcTP

📚 Scotland’s Stats and History at the Euro

Scotland has never won an international competition. However, it is certain that they will try to achieve that feat this summer.

Scotland will be the ‘underdogs’ in Group D and will face England, Croatia and the Czech Republic.

One of the main underdogs of this Euro. With many people having high hopes for this team, the English will have to prove that these expectations are not misplaced.

The world runners-up are inevitably among this competition’s favourites. As this is the last time several of their senior players will be participating, the Vatreni will certainly want to make their mark on the tournament.

Scotland seems to have made a habit of going up against the Czech Republic. . Indeed, the two teams have already met in the Nations League (2 wins for Scotland). However, Scotland will need to beware of this difficult opponent.