Denmark’s Parken Stadium is one of the 12 stadiums that will host Euro 2020 matches. Home of the FC Copenhagen and the national team, this stadium regularly plays hosts to big European fixtures as well as many concerts.

The Parken Stadium (or Parken) is located in the Østerbo district of Copenhagen. For the first time ever, it will lend its pitch to some of the Euro matches.

History Made at Parken Stadium

All About Parken Stadium

Built on the same plot as the Københavns Idrætspark, replacing the old Copenhagen Stadium, the Parken was inaugurated on the 9th of September 1992 by a Danish loss (1-2) to Germany. With a capacity of 38,065 seats, the stadium is classed as a category 4 venue, which is the reason that it cannot host Champions League Finals, as this requires at least 50,000 seats. Constructed by Baltica Finans A/S with the guarantee that national fixtures would be hosted there for the next 15 years, the Danish agency eventually resold the stadium to FC Copenhagen for 138 million Danish crowns in 1998. From then on, the club was proprietor and installed offices for Parken Sports & Entertainment, which manages F.C.København (FCK). 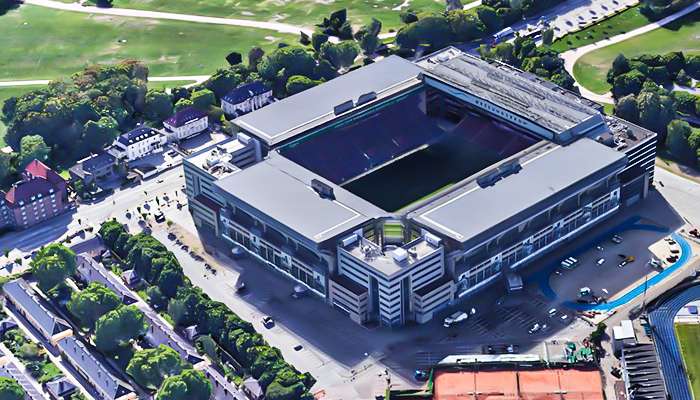 The stadium has hosted great European showdowns like the European Cup Winner’s Cup in 1994 between Arsenal and Parma (1-0). The stadium also set the record for the number of spectators in 2005 (42,099 spectators) during the 2006 World Cup Qualifications (Victory to Denmark 1-0 against Greece)

On a less positive note, the referee presiding over a match between Denmark and Sweden was assaulted by supporters in the 89th minute after calling a penalty for Sweden.

In 2014, the club made a deal with the Telia group in order to equip the stadium with free wifi for all its supporters. In exchange, FCK renamed the stadium “Telia Parken” for 7 years.

The stadium is one of the 12 selected to host Euro 2021 fixtures. For the first time in its history, the Danish stadium has been assigned fixtures in this competition. In fact, four fixtures will be played: three in the group stage and one in the round of sixteen.

Like all the other stadiums, the Parken Stadium will also host one of the knock-out fixtures. This match will oppose the squads that finished second in groups D and E.

The stadiums hosting the event should be able to allow entry to the general public. The maximum allowed capacity will however be determined by the Danish government.