Finland Euro 2020: Everything you need to know about Huuhkajat 🇫🇮

The 54th-ranked nation in the world will be looking to do well in their first international tournament. Today we take a look at the Finnish team, nicknamed “Huuhkajat”.

Finland’s participation in the Euro will be a landmark event for the country. It will be the first time that Markku Kanerva’s team has participated in the final stage of a European championship. Better still, it will be their first final stage in an international competition.

Ranked 54th in the world, this is their best position for over 10 years. The Huuhkajat (Eagle Owls) qualified for the Euro by beating Liechtenstein (3-0). This historic victory was celebrated with fireworks and hundreds of fans descending upon the Helsinki pitch.

Although the team is not very well known, it included some of the biggest names in world football such as Jari Litmanen and Teemu Tainio. The team’s success is based on the efficiency of Teemu Pukki, the Norwich (Championship) striker who scored 10 goals during the qualification phase.

Although the Finnish national team does not have any “big names” in its ranks, some players play at a good level in Europe. The majority of these players are from Scandinavian clubs, but others have managed to succeed abroad. 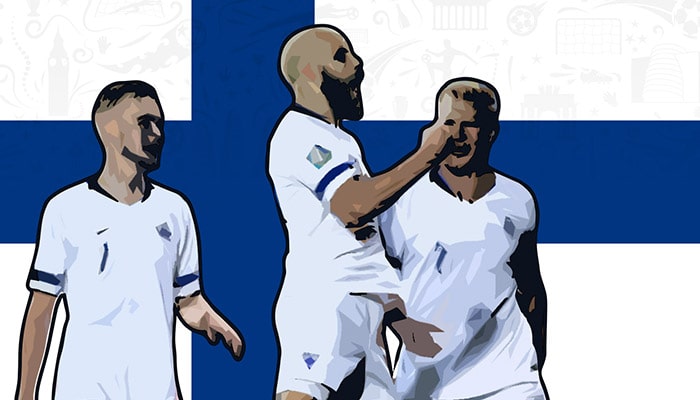 Markku Kanerva revealed his group of 26 players for the competition:

The Finnish coach, who took up his post in December 2016, has always worked in his native country. As a player, apart from a short stint in Sweden (IF Elsborg), he played 13 seasons at HJK Helsinki, a historic club in Finland. He even played in the Champions League with the capital city’s club.

Finland will play at home in white with their flag’s cross. Their away jersey is a more neutral dark blue.

Finland is in group B at Euro 2020. They will face Denmark, Belgium and Russia.

🏃Finland’s preparation for the Euro

Finland finished second in their Euro 2020 qualifying group behind Italy. They won 6 of their 10 games (and lost 4).

The Finnish team also finished 2nd in their group in the Nations League with 4 wins out of 6 games.

Five Games Before the Euro

Like all nations in the European zone, this month Finland is playing in the qualifying games for the 2022 World Cup in Qatar. These Scandinavians will be keen to qualify, as they have never managed to do so. In addition to these games, the Finnish Federation has organised three others (including one on 31st March) to prepare for the competition.

He is certainly the most famous player in the Finnish squad. Teemu Pukki, who plays as a striker for Norwich (Championship), played in the Premier League last year and scored 11 goals in 36 games. This season, he has already scored 22 goals in 34 English D2 games. A very good performance.

At 30 years old, he has played for various clubs in Europe, whether in Spain (Sevilla), Germany (Schalke 04) or in Scotland (Celtic). He scored 10 goals in the Euro 2020 qualification phase and finished third in the scoring charts. He will be Finland’s strong point and will have the task of taking his team as far as possible. 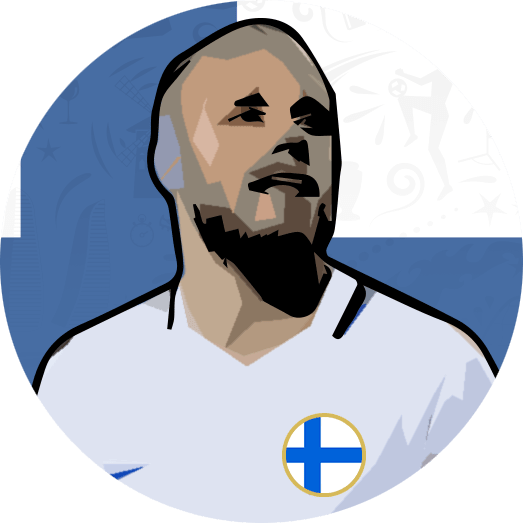 The 25-year-old midfielder has just been crowned Scottish Champion with his club Rangers. Having played in Arsenal’s youth teams, he has become a key figure in Steven Gerrard’s bid to win the title that had eluded his team for ten years.

He can also perform as a defensive midfielder and will certainly be a valuable addition to the Finnish midfield. He is also a Sierra Leonean national and has been playing for Finland since he was at U18 level.

📚 Stats and history: the Finnish Team at the Euro

As mentioned above, Euro 2020 will be the first international competition the Finnish national team will play. Therefore it is certain that history will continue to be made in June.

A team with many talented players, it held off France in the group stage at the 2018 World Cup. Behind Belgium, it appears to be a strong candidate for second place in Group B.

Russia surprised everyone when they hosted the World Cup in 2018. After beating Spain, the Russians lost to Croatia, future finalists of the tournament. They could once again be the surprise of the tournament.

Quite simply, we are talking about the best nation in world football. Semi-finalists defeated by France in 2018, the Belgians are once again favourites at Euro 2020.