It’s Seville and its Estadio de La Cartuja that will represent the Iberian country during the Euro 2020-2021 instead of the city of Bilbao. Basque City’s inability (as well as that of Dublin) to welcome the public into its stadium, meant that it is no longer able to act as a host city. This is also the same for Dublin.

Before being used for the football matches, La Cartuja – named after the neighbourhood in which it’s located – was built for the World Athletics Championships in 1999. It also hosts concerts and tennis, and has been designated as the venue for the King’s Cup finals between 2020 to 2024.

The stadium is located Northwest of Seville, in the district of La Cartuja. Designed according to the official criteria of the International Olympic Committee, it was inaugurated on May 5th 1999, at the World Athletics Championships. In addition to a natural lawn field, it features eight synthetic athletics tracks, two long jump runs and four jump pits. It also has commercial areas that include a hotel and a restaurant. 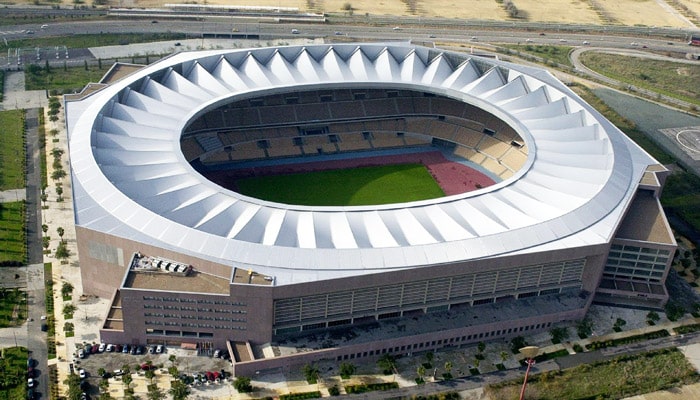 However, the construction was debated because it was deemed useless by many. This is because the city of Seville already has two large stadiums (Benito Villamarin and Ramon Sanchez Pizjuon) that host Betis Seville and FC Seville. One of the interesting things about this stadium is that no football team is a resident. It hosts one-off sporting events such as some of the national team La Roja’s matches or National Cup finals, the most recent of which was the King’s Cup on 17th April.

It has a capacity of 57,619 seats (category 4 stadium) and its construction cost 120 million euros.

Replacing Bilbao to host Euro matches, Seville inherited four matches: three from the Group Stage and one Round of 16.

The Olympic stadium was therefore entrusted with three Group E matches which were to take place in Bilbao. Spain, Poland, Sweden and Slovakia are therefore affected by this change of location.

La Cartuja will also host a Round of 16 matches during Euro 2020.

If the stadium was chosen to replace the San Mamés Bilbao, it’s because of declarations from the community of Seville. They announced that it may be able to fill the enclosure to 30% of its capacity, that is to say just over 17,000 people.